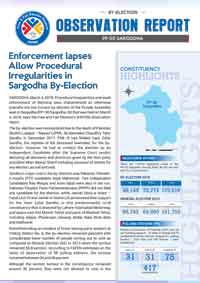 The by-election was necessitated due to the death of Pakistan Muslim League – Nawaz’s (PML-N) lawmaker Chaudhry Tahir Sandhu in December 2017. PML-N had fielded Yasir Zafar Sandhu, the nephew of the deceased lawmaker, for the by-election. However, he had to contest the election as an Independent Candidate after the Supreme Court verdict declaring all decisions and directives given by the then party president Mian Nawaz Sharif including issuance of tickets for any election, as null and void.

Sandhu’s major rival in the by-election was Pakistan Tehreek-e-Insaf’s (PTI) candidate Sajid Mahmood. Two Independent Candidates Rao Waqas and Asim Iqbal were also in the run. Pakistan Peoples Party Parliamentarians (PPPP) did not field any candidate for the election, while Jamiat Ulma-e-Islam – Fazal (JUI-F) and Jamat-e-Islami (JI) announced their support for the Yasir Zafar Sandhu in this predominantly rural constituency that is bisected by Lahore-Islamabad Motorway, and spans over Kot Momin Tehsil and parts of Bhalwal Tehsil, including Salam, Phularwan, Deowal, Abdal, Nabi Shah Bala and Sadhuwal.

Notwithstanding an incident of brawl among party workers at Polling Station No. 6, the by-election remained peaceful with considerably lower number of people turning out to vote as compared to General Election (GE) in 2013 when the turnout remained 58.8 percent. According to FAFEN estimates on the basis of observation of 98 polling stations, the turnout remained between 34 and 36 percent.

Although the women turnout in the constituency remained around 30 percent, they were not allowed to vote in the Chaowal neighborhood of the constituency. According to FAFEN observers, only one of a total of 748 registered voters casted her vote until 4:15 pm at Polling Station No. 94 (Government Boys Middle School, Chaowal). The incident shows the inefficacy of the new legal measure that only comes into effect when women’s turnout remains below 10 percent in the entire constituency.

Despite improved legal framework that empowers the Election Commission of Pakistan (ECP) to take determining measures to ensure that an election is held by the book, widespread violations of the election law and rules were observed in the constituency. The ECP did not enforce provisions in the Elections Act, 2017 that are meant to maximize electoral transparency. Key among those are uploading the election-related documents including the List of Proposed Polling Stations (Form-28), the Final List of Polling Stations, the List of Validly Nominated Candidates (Form-32), and the List of Contesting Candidates (Form-33) on its website. As many as four FAFEN observers duly accredited by the ECP were barred by the presiding officers and police from observing the voting process. In addition, three observers were stopped by security officials from observing the counting process.

FAFEN deployed 27 trained and non-partisan observers including 22 men and five women to observe the by-election. Chaudhary Tahir Sandhu, who died of a heart attack in December 2017, successively won this seat during GE 2013 by bagging 42% of the polled votes and GE 2008 by securing 31% of the polled votes. The turnout in the constituency remained 58.84% in 2013 and 42 .72% in 2008.

FAFEN observed the voting process at 98 polling stations and counting at 24 polling stations. Moreover, these observers collected Form-45 (Result of the Count) and Form-46 (Ballot Paper Account). FAFEN employs a standardized checklist for observing the Election-Day activities including the opening and closing of polling stations, security arrangements, campaigning and canvassing around and inside polling stations, ballot processing, facilitation to the disabled and elderly voters, counting, and result consolidation processes. Trained non-partisan observers were deployed in the constituency who spent a period ranging from 60 minutes to 120 minutes at each polling station to record their observation on the checklists. The observation also includes interviews of Presiding Officers regarding the election arrangements.

Security Arrangements: ECP had sought assistance from the Pakistan Army and the Punjab Rangers to ensure fool-proof security inside and outside polling stations on the election-day. According to a notification issued by the ECP, the designated Army and Rangers officials were given First Class Magisterial powers in case of personation of a voter, capturing of polling stations, illegal canvassing or illegal practices related to the polling process. The personnel were required to report any irregularity or malpractice to the Presiding Officer of the concerned polling station and if he/she failed to prevent the commission of reported irregularity, the security staff were required to bring the matter into the notice of the Pakistan Army officers deployed in the area.

Voter Identification and Ballot Processing at Polling Stations: Through its trainings, the ECP had significantly improved the processing of voters at the polling stations – from identification of voter to the issuance of ballot paper.  However, further improvement is needed to ensure complete enforcement of these critical processes. At 59 polling booths, polling officers were either calling out the name of voters in a low voice or not calling them out at all before crossing out their names on the electoral rolls. At one booth, polling officer was seen not crossing out the name of the voter on the electoral roll. At another polling booth, assistant presiding officer was not asking the voters to put thumb impression on their counterfoil. In another instance, the assistant presiding officer was not writing the name of the electoral area on the counterfoil.

Breach of Secrecy: The protection of the right of voters to secrecy has also been significantly improved as compared to 2013 GE. FAFEN observers reported from only six polling stations that voters were accompanied by unauthorized persons behind secrecy screens in full view of election officials.

Pre-Election Observation Findings: PP-30 constituency witnessed a largely peaceful campaign for the by-election. ECP had made efforts to enforce the Code of Conduct for Political Parties and Contesting Candidates, and fined the PTI’s candidate Rs. 10,000 for displaying oversized campaign materials. The Commission also issued a show-cause notice to the Federal Minister for Parliamentary Affairs for campaigning in the constituency in support of the PML-N’s backed Independent Candidate. The action was taken following the report by the ECP’s Monitoring Team that the Minister was “exercising undue influence while convincing the general public and canvassing the voters for casting vote in favor of Yasir Zafar Sandhu”. The minister, according to FAFEN observers, also inaugurated development schemes in the constituency during the campaign period.

ECP’s code of conduct bars the use of loudspeakers and the government property for the purpose of campaigning. FAFEN observers reported that the PTI candidate distributed cash among the constituents in some areas, violating legal bars on gratification and inducements to voters. On the other hand, the Federal Minister for Parliamentary Affairs inaugurated sewerage and gas supply schemes in various areas of the constituency during the campaign period.

In contravention of Section 180(2) (b) of the Elections Act, 2017, none of the election posters of any candidate printed the name of the printer and the publisher.