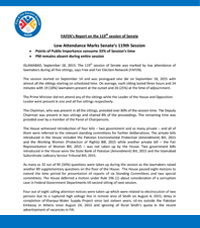 ISLAMABAD, September 18, 2015: The 119th session of Senate was marked by low attendance of lawmakers during all five sittings, says Free and Fair Election Network (FAFEN).

The session started on September 14 and was prorogued sine die on September 18, 2015 with almost all the sittings starting on scheduled time. On average, each sitting lasted three hours and 24 minutes with 19 (18%) lawmakers present at the outset and 26 (25%) at the time of adjournment.

The Prime Minister did not attend any of the sittings while the Leader of the House and Opposition Leader were present in one and all five sittings respectively.

The House witnessed introduction of four bills – two government and as many private – and all of them were referred to the relevant standing committees for further deliberations. The private bills introduced in the House included the Pakistan Environmental Protection (Amendment) Bill, 2015 and the Working Women (Protection of Rights) Bill, 2015 while another private bill – the Fair Representation of Women Bill, 2015 – was not taken up by the House. Two government bills introduced in the House were the State Bank of Pakistan (Amendment) Bill, 2015 and the Islamabad Subordinate Judiciary Service Tribunal Bill, 2015.

As many as 32 out of 95 (34%) questions were taken up during the session as the lawmakers raised another 89 supplementary questions on the floor of the House. The House passed eight motions to extend the time period for presentation of reports of six Standing Committees and two special committees. The House deferred a motion under Rule 196 (1) about consideration of a corruption case in Federal Government Departments till second sitting of next session.

Four out of eight calling attention notices were taken up which were related to electrocution of two persons due to a ruptured high voltage line in remote area of Sindh on August 4, 2015; delay in completion of Khanpur Water Supply Project since last sixteen years; sit-ins outside the Pakistan Embassy in Athens since August 24, 2015 and ignoring of Rural Sindh’s quota in the recent advertisement of vacancies in FIA.

The House passed a motion under Rule 172A recommending conversion of the full House into a Committee for considering matter regarding legislative, administrative and other measures required for mainstreaming and ensuring constitutional rights to the people of Federally Administered Tribal Areas (FATA).

The members raised 86 points of public importance that consumed 333 minutes (33%) of the session. The Session also witnessed presentation of 21 reports of several Senate Committees, of which six were legislative reports and others on range of issues.

Eleven periodic reports presented by ministers on matters referred by the House were disposed of. These reports were regarding construction of Khanpur road by NHA; splitting Peshawar into two parts; no response from government of Pakistan on death of Mullah Omer; detention of a Pakistani minor fisherman in Indian jail; enhancement of security for all installations; irregularities in the affairs of Langland Public School in Chitral; restriction on the entry of Chinese nationality holders in Gawadar without NOC; non-broadcasting of programs in Balochi language; geological changes in Gilgit and Hunza; recommendations of Standing Committees on Railways and non-implementation on the decision by QESCO to provide electricity to agriculturists for eight hours at Rs.10,000 per month.

A motion under Rule 60 was also disposed of which was about the original estimated cost of Kachhi Canal project arising out of the answer to starred question number 6, replied on August 12, 2015.

The House debated a motion under Rule 218 about overall security conditions at and around Tarbela Dam. Another motion about current status to FATA was referred to Committee of the Whole.

Two other motions under Rule 218 about the status of implementation of Aghaz-e-Haqooq-e-Balochistan Package and government’s decision to increase the domestic, commercial and industrial gas tariff were moved in the House and will be discussed in later sittings. Furthermore, a motion about non-vacation of government quarters by the Estate Office Islamabad was not taken up due to mover’s absence.

The House adopted three resolutions in total, one for expressing condolence on demise of former Deputy Chairman Senate Mir Abdul Jabbar Khan, the other about replacing 33 KV transmission line in Sherani, Zhob and Musakhel with 132 KV line and the last one pertaining to the legislation to make provisions for revision of decisions on the cases taken up under clause (3) of Article 184 of the Constitution.

Three other resolutions were not taken up by the House due to absence of movers which included launch of low cost housing schemes for the homeless families, evolving effective mechanisms to check and verify the truthfulness of the statements of assets and liabilities submitted to Election Commission by the parliamentarians and improving services of PIA.

The House admitted four adjournment motions (AMs) for discussion which were regarding violation on line of control by Indian forces; failure of OGRA in fixing import and sale price of LNG; failure of Nandipur power project and production of spurious and substandard medicines.

Two AMs were also discussed in the House. Six lawmakers – three from PML-N, two from PPPP and one from PTI – participated in the debate on AM about rehabilitation efforts in 2005 quake hit areas for 25 minutes while Chairman Senate spoke on it for two minutes. Another AM regarding disconnection of gas to Pakistan Steel Mills by Sui Southern Gas Company was discussed for 14 minutes by five lawmakers – two each from PTI and PML-N and one from PPPP. Chairman Senate spoke on the issue for one minute following which the State Minister for Petroleum and Natural Resources concluded the debate during his 16-minute speech.

The House commemorated International Day of Democracy. Nine lawmakers – two from PPPP and one each from PML, PkMAP, NP, PTI, BNP-M, JI and PML-N – expressed their views on this occasion consuming 50 minutes while the Chairman concluded the debate during his eight minute speech.

A PTI lawmaker pointed out the quorum during third sitting which led to the adjournment of the sitting due to presence of less than 25% lawmakers in the House after count.

The House witnessed three instances of walkout. During the third sitting, PTI lawmakers walked out of the House for eight minutes to protest unsatisfactory reply to a question related to ODGCL.

During the fourth sitting, PPPP lawmakers led by Opposition Leader staged a token walkout for one minute against dissatisfactory statement by Advisor to Prime Minister on Foreign Affairs regarding foreign issues. Three PPPP lawmakers walked out of the House for 41 minutes in the same sitting for not fulfilling the commitments made with medical and paramedical staff of government hospitals in Islamabad and controversy on distribution of BISP fund in Sindh and Balochistan.

This session report is based on direct observation of the Senate proceedings conducted by PATTAN Development Organization – a member organization of FAFEN. Errors and omissions are excepted.