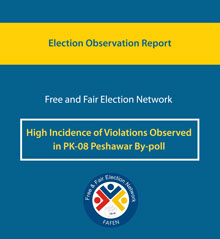 ISLAMABAD, May 12, 2016: Impressive number of people turned out to vote in PK-08 Peshawar-VIII by-election on Thursday held amid stringent security arrangements.

Deviation from polling schemes, suspicious voting patterns at some polling stations and illegal canvassing around polling stations were some key highlights of election that followed an active campaigning period.

Although heavy security was present both inside and outside the polling stations, campaigning and canvassing by political parties was witnessed around more than one third of the observed polling stations.

FAFEN observers were not allowed to enter polling premises by security forces at four polling stations despite the fact that they carried accreditation cards issued by the Election Commission of Pakistan (ECP). Security forces deployed on election duty, in the absence of appropriate training, have been observed to be implementing election laws according to their own interpretation. FAFEN has been witnessing bar on its observers from observing the voting processes for the last three by-elections.

At 11 polling stations in PK-08, voters of certain census block codes were not entertained at polling stations mentioned in polling schemes. Such deviations from polling schemes can potentially deprive voters from exercising their right to vote. Also, FAFEN observers documented suspicious voting patterns at five polling stations where the speed of polling was higher than the maximum possible 45 votes per hour per booth.

Security staff at 36 observed polling stations told FAFEN observers that they were not given any training prior to their deployment, indicating at the need for defined ECP training protocols for security officials.

Voting processes were relatively better managed. However, FAFEN observers reported that irrelevant voters were seen to be accompanying the voter behind voting screen at nine polling stations while polling officials went with voters behind secrecy screen at two polling stations.

FAFEN deployed a total of 24 observers – 14 male and 10 female to observe all 98 polling stations set up by ECP. However FAFEN’s preliminary report contains information from the 48 observed polling stations (14 male, 16 female, 18 combined) data acquired telephonically on the Election Day. The observers were mobilized to observe the opening, closing and counting process of the election.

The by-election was necessitated after the death of Arbab Akbar Hayat of PML-N. Mr. Hayat was declared returned after he secured 13,528 votes in General Elections 2013 with Asif Iqbal Daudzai of JUI-F becoming runner up with 10,458 votes.

A total number of 17 candidates contested the by-election with eight representing parties and remaining vying as independent candidates. All major parties, including PML-N, PTI, PPPP, JUI-F and ANP had fielded their candidates.

ECP managed by-election through DRO and RO from its own cadre of officers. The election campaign was concluded peacefully with leading leaders of PML-N and PTI taking part in the election rallies for the campaign of their contesting candidates. Many candidates blamed PML-N and PTI for announcing and promising development work in the constituency.