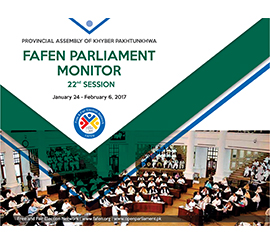 ISLAMABAD, February 11, 2017: The 22nd Session of the Khyber Pakhtunkhwa Assembly was prorogued abruptly just after four sittings. The Chair adjourned the third sitting on Jan 27, 2017 for February 20, 2017, but later the sitting was rescheduled for February 6, 2017 and was prorogued sine die the same day. On average, each sitting began 39 minutes late and lasted for an hour and 55 minutes, observes Free and Fair Election Network (FAFEN) in Session Report.

Besides the prorogation, the important tool of the government oversight remained missing during the entire session as more than 50%  questions remained unaddressed due to the absence of relevant ministers and not receiving reply from the concerned departments. However, the House adopted five resolutions and passed four bills during four sittings held between January 24 and February 6, 2017.

Out of 34 Starred Questions, the House took up only nine questions (26%). In addition, legislators raised eight Supplementary Questions to gain further clarity on the government’s response.

The KP Police Bill, 2017 is aimed at bringing reforms to the police department and giving financial and transfer and postings powers to the Inspector General of Police. The Chief Minister and other treasury lawmakers defended the bill while the Opposition Leader, PML-N Parliamentary Leader and other opposition lawmakers objected to the legislative proposal.

The fourth bill – the KP Ehtesab Commission (Amendment) Bill, 2017 was passed to amend KP Ehtesab Commission Act 2014, following which any suspect of corruption and corrupt practices will not be arrested without the permission of Ehtesab court. Previously, under Section 36 of the Act, the Director General or an officer authorized by him was empowered to arrest any person for the purpose of inquiry or investigation.

Another important factor of FAFEN’s observation was the lawmakers’ attendance that remained low throughout the session – with an average of 36 members (29%) present at the start and 35 (28%) at the end of each sitting. The quorum was pointed out thrice during the session while the Chair had to adjourn the sitting on one occasion.

During the second sitting, the entire opposition walked out of the House twice over non-submission of replies to their questions by the treasury while the protest of two female lawmakers – one each of QWP and PML-N – was witnessed during the same sitting against long absence of PTI female lawmakers from the House.

A JUI-F female lawmaker walked out of the House for two minutes when the Chair did not allow her to speak on a Point of Order during the 3rd sitting held on January 27, 2017. The PML-N and PTI lawmakers protested over the incident and chanted slogans against each other in front of the dais, which was followed by the adjournment of the sitting until February 20, 2017.

The Speaker and the Deputy Speaker remained present during three sittings each and presided over 49% and 21% of the proceedings respectively, while 30% percent of the session’s time was spent in breaks. The Parliamentary leaders of PML-N and ANP attended three sittings each followed by JI and QWP-S (two each) and PPPP (one). The Chief Minister attended two sittings, consuming 31% of the session’s time while the Leader of the Opposition attended two out of four sittings that took 49% of the entire proceedings.

The House took up two Calling Attention Notices (CANs) over the non-issuance of development funds for all projects and allowances to employees serving at MPA hostel.

The lawmakers raised 14 Points of Order (POs) consuming 26 minutes of the proceedings.

The House also witnessed presentation of five reports by various committees, while a privilege motion of a JUI-F lawmaker against the Transport Department was forwarded to the relevant committee for not replying to his question.

END_OF_DOCUMENT_TOKEN_TO_BE_REPLACED

KP Assembly transacts entire agenda
ISLAMABAD, October 4, 2021: The Provincial Assembly of Khyber Pakhtunkhwa (KP) transacted entire agenda on Monday in the absence of leaders of the House and…