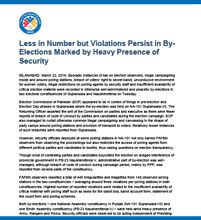 ISLAMABAD, March 22, 2016: Sporadic instances of bar on election observers, illegal campaigning inside and around polling stations, breach of voters’ right to secret ballot, unconducive environment for women voters, illegal restrictions on polling agents by security staff and insufficient availability of critical election material were recorded in otherwise well-administered and peaceful by-elections in two electoral constituencies of Gujranwala and Nausheroferoz on Tuesday.

Election Commission of Pakistan (ECP) appeared to be in control of things in pre-election and Election Day phases in Gujranwala where the by-election was held on NA-101 Gujranwala-VII. The Returning Officer asserted the writ of the Commission on parties and executive as there were fewer reports of breach of code of conduct by parties and candidates during the election campaign. ECP also managed to curtail otherwise common illegal campaigning and canvassing in the shape of party camps around polling stations and provision of transport to voters. Relatively lesser instances of such breaches were reported from Gujranwala.

However, security officials deployed at some polling stations in NA-101 not only barred FAFEN observers from observing the proceedings but also restricted the access of polling agents from different political parties and candidates to booths, thus raising questions on election transparency.

Though most of contesting parties and candidates boycotted the election on alleged interference of provincial government in PS-23 Nausheroferoz-V, administrative part of by-election was well-managed, although breach of code of conduct during campaign period, mainly by PPP, was reported from several parts of the constituency.

Both by-elections – one National Assembly constituency in Punjab (NA-101 Gujranwala-VII) and one Sindh Assembly constituency (PS-23 Nausheroferoz-V) – were held amid heavy presence of Army, Rangers and Police. Security officials were observed to be acting independent of Presiding Officers at some polling stations.

By-election at Gurjanwala’s National Assembly constituency was necessitated after de-seating of PML-N MNA Iftikhar Ahmed Cheema who had won in GE-2013 securing 99,924 votes with PML-J’s Muhammad Ahmad Chatha remained the runner-up. Cheema’s disqualification was sought by the runner up on grounds that the latter had concealed his financial assets while submitting his nomination.

By-election on Nausheroferoz’s provincial constituency was held because the 2013 winner of the constituency, Masroor Khan Jatoi of the National People’s Party (NPP), was de-notified following a tribunal’s decision on the fake voting plea from the runner-up. NPP candidate had secured 30,594 votes in GE 2013 against PPP’s runner-up FerozJamali who bagged 29,027 votes.

A total of 15 validly nominated candidates were running for the seat in NA-101 but in essence, it seemed to be a two-horse race between PML-N’s Iftikhar Ahmad Cheema and PTI’s Muhammad Ahmad Chatha whereas in PS-23, four candidates contested for the seat but practical withdrawal of the independent candidates had rendered the status of a lone runner to PPP’s candidate. Winner of GE-2013 i.e. erstwhile NPP now merged into PML-N also boycotted the election.

In Gujranwala, ECP’s deputed DRO and RO from its own cadre of officers did well in terms of enforcing the code of conduct for political parties and contesting candidates. No extravagant campaign materials were witnessed. Returning Officers got removed the illegal campaign material in few instances where political parties resorted to violate code provisions during campaigning. Gujranwala campaign also concluded peacefully. National level leaders of PML-N and PTI came to conduct electoral rallies in the area. There were reports of PML-N initiating some development schemes in the area but their enactment was stopped by the RO.

On the other hand in PS-23, use of loudspeaker by PPP workers for rallies and announcements were reported. Further the other contesting candidates showed reservations on the deployment of election staff terming them as officials from provincial government and had reservations over PPPP candidate’s campaign. Breach of code of conduct, mainly by PPPP candidate, was reported with oversized banners and posters displayed.

Keeping in view the vast observation of elections in Pakistan and the international best practices, it takes at least one and a half minute to process one voter at a polling booth. With this rate, no more than 45 voters can vote in an hour. A voting rate greater than 45 voters per hour may, therefore, can be termed suspicious. According to FAFEN observers, suspicious voting patterns were observed at 24 polling booths at 19 polling stations in NA-101 where the number of votes polled in an hour were exceeding the limit while in PS-23 no suspicious voting pattern was observed at any observed polling stations.

Campaigning and Canvassing around Polling Stations

As many as 171 instances of insufficient availability of critical election material were reported on Election Day from NA-101 and 39 from PS-23. In NA-101, 55 cases were reported for insufficient availability of ballot papers issued by RO. Similarly 22 cases were reported where presiding officers did not have polling scheme available with them. In PS-23, polling scheme was missing at nine polling stations while at six polling stations one secrecy screen per polling booth was not available.