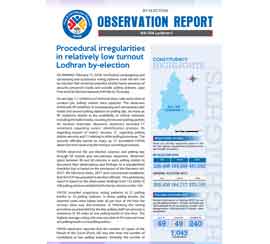 On average, 2.7 violations of electoral laws, rules and codes of conduct per polling station were reported. The observers witnessed 99 violations of campaigning and canvassing rules inside and around polling stations on polling day. As many as 90 violations related to the availability of critical materials including the ballot books, counting forms and sealing packets for election materials. Moreover, observers recorded 77 violations regarding voters’ identification process, 26 regarding breach of voters’ secrecy, 21 regarding polling station security and 11 relating to other polling processes. The security officials barred as many as 12 accredited FAFEN observers from observing the voting or counting processes.

FAFEN observed the pre-election process and polling day through 50 trained and non-partisan observers. Observers spent between 30 and 60 minutes in each polling station to document their observations and findings on a standardized checklist that is based on the provisions of the Elections Act, 2017, the Elections Rules, 2017 and instructional handbooks that the ECP has provided to election officials. This preliminary report is based on the observation findings from 122 (36%) of 338 polling stations established for the by-election in NA-154.

FAFEN observers reported from 28 polling stations that the workers of several political parties had set up camps within 400 meters of the polling stations in violation of the electoral rules. Voters were seen carrying vote vouchers (parchis) with visible symbols of the contesting parties or candidates inside 16 polling booths. Similarly, in nine instances, election officials did not remove campaign materials inside and outside polling stations as required by the law. Moreover, party or candidate supporters were observed providing transport to voters outside 46 polling stations.

According to FAFEN estimates, the overall turnout of voters in this by-election is expected to be approximately 45.4 percent – 47.4 percent for men and 42.7 percent for women. The observers reported increasing number of voters turning out to cast their vote in the afternoon. However, amidst the strict security, only a couple of voters were being allowed to enter a polling station at a time while the rest were made to wait in queues outside the polling stations. The observers reported the congested arrangement of polling stations at a number of places. As many as three polling stations comprising 11 polling booths were set up in a primary school building at Basti Risala with a total of 4,178 voters assigned.

The ECP did not use the Biometric Verification Machines (BVMs) or Electronic Voting Machines (EVMs) at any of the polling station in the constituency.