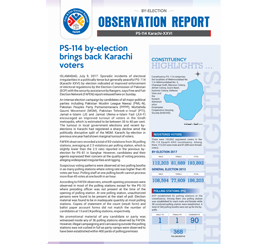 An intense election campaign by candidates of all major political parties including Pakistan Muslim League Nawaz (PML-N), Pakistan Peoples Party Parliamentarians (PPPP), Muttahida Qaumi Movement (MQM), Pakistan Tehreek-e-Insaf (PTI), Jamat-e-Islami (JI) and Jamiat Ulema-e-Islam Fazl (JUI-F) encouraged an improved turnout of voters in the Sindh metropolis, which is estimated to be between 35 and 40 percent. The turnout in local government elections and recent by-elections in Karachi had registered a sharp decline amid the politically disruptive split of the MQM. Karachi by-election in the recent past had shown marginal turnout of voters.

FAFEN observers recorded a total of 83 violations from 36 polling stations, averaging at 2.3 violations per polling station, which is slightly lower than the 2.5 ratio reported in the previous by-election for PS-81 in Sanghar. However, candidates and their agents expressed their concern at the quality of voting process, alleging widespread irregularities and rigging.

No promotional material of any candidate or party was witnessed inside any of 36 polling stations observed by FAFEN. However, illegal campaigning and canvassing outside the polling stations was not curbed in full as party camps were observed to have been established within 400 yards of polling premises around 14 polling stations. Similarly, candidates were providing transport facility to voters at 18 polling stations. Voters were also seen carrying “voter chits” bearing party symbols at six polling stations, which are not permissible under the law and relevant court rulings.

END_OF_DOCUMENT_TOKEN_TO_BE_REPLACED

Press Releases Categories
All rights reserved. Any part of the webpage may be produced or translated by duly acknowledging the source, all content is copyrighted © 2006-2019 Free & Fair Election Network