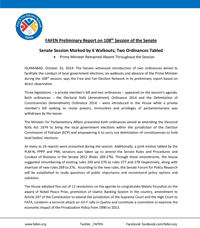 ISLAMABAD, October 31, 2014: The Senate witnessed introduction of two ordinances aimed to facilitate the conduct of local government elections, six walkouts and absence of the Prime Minister during the 108th session, says the Free and Fair Election Network in its preliminary report based on direct observation

Three legislations − a private member’s bill and two ordinances − appeared on the session’s agenda. Both ordinances − the Electoral Rolls (Amendment) Ordinance 2014 and the Delimitation of Constituencies (Amendment) Ordinance 2014 − were introduced in the House while a private member’s bill seeking to revise powers, immunities and privileges of parliamentarians was withdrawn by the mover.

The Minister for Parliamentary Affairs presented both ordinances aimed at amending the Electoral Rolls Act 1974 to bring the local government elections within the jurisdiction of the Election Commission of Pakistan (ECP) and empowering it to carry out delimitation of constituencies to hold local bodies’ elections.

As many as 24 reports were presented during the session. Additionally, a joint motion tabled by the PLM-N, PPPP and PML senators was taken up to amend the Senate Rules and Procedures and Conduct of Business in the Senate 2012 (Rules 269-276). Through these amendments, the House suggested renumbering of existing rules 269 and 270 as rules 277 and 278 respectively, along with insertion of new rules 269 to 276.  According to the new rules, the Senate Forum for Policy Research will be established to study questions of public importance and recommend policy options and solutions.

The House adopted five out of 12 resolutions on the agenda to congratulate Malala Yousafzai on the award of Nobel Peace Prize, promotion of Islamic Banking System in the country, amendment to Article 247 of the Constitution to extend the jurisdiction of the Supreme Court and the High Court to FATA, condemn a terrorist attack on JUI-F rally in Quetta and constitute a committee to examine the economic impact of the Privatization Policy from 1990 to 2013.

The session witnessed six protests − four by the opposition lawmakers – that consumed 36 minutes of the proceedings’ time. The opposition’s walkouts were over terrorist attacks on ANP workers, Interior Ministry’s prolonged delay in answering a question, Chair’s refusal to allow an ANP Senator to ask a supplementary question, privatization of Oil and Gas Development Company Limited (OGDCL) and torture of its employees in Islamabad. The MQM members did not join the opposition in two walkouts.

All female Senators staged a walkout over the remarks of a JUI-F lawmaker who demanded a new law for compulsory marriage of women aged 40 or above. Similarly, the MQM Senators left the plenary over the remarks of the Opposition Leader in the National Assembly about the muhajir community.

The session comprising 10 sittings was held from October 17 to 30 and lasted 21 hours and 57 minutes. On average, each sitting started 46 minutes behind the schedule with on average 17 members present at the outset and 24 at the end of a sitting. The quorum, observed missing on various occasions, was pointed out once each by the ANP and PPPP Senators. On both instances, the Chair ordered the bells to be rung for five minutes and adjourned a sitting as the quorum was found incomplete.

The Leader of the House attended all 10 sittings while the Leader of the Opposition attended six sittings. The Prime Minister remained absent throughout the session. The Chairman attended six sittings and presided over 50% of the proceedings while the Deputy Speaker was present in seven sittings and chaired 42% of the session’s time. The remaining 8% time was consumed by four prayer breaks. The parliamentary leaders of ANP and PPPP remained most regular as they attended seven sittings each, followed by the JUI-F leader (three), PML (two) and MQM, BNP-A and PML-N (one each).

The House took up one out of four calling attention notices (CANs) which was raised by a PPPP lawmaker. It was addressed to the Ministry of Foreign Affairs regarding recent cross-border aggression by the Indian troops on the Line of Control and the Working Boundary.

The male Senators moved 11 motions under Rule 218; however, the House took up two motions which were submitted by an independent and a MQM Senator regarding the government’s steps to cope with the recent floods and the overall condition of health sector after the devolution of subject to provinces. A total of 12 Senators − PPPP (3), ANP, PML-N and PML (2 each) and MQM and JUI-F (one each) and an independent member − debated these motions.

The male Senators of ANP, JUI-F and PPPP tabled a joint motion to adjourn the house proceedings to debate the killing of two members of the Sikh Community in Khyber Pakhtunkhwa. Nineteen Senators − one female and 18 male − spoke on the matter.

This publication has been produced with the assistance of the European Union. The contents of this publication are the sole responsibility of FAFEN and can in no way be taken to reflect the views of the European Union. This preliminary report is based on direct observation of the Senate proceedings conducted by PATTAN Development Organization; a member organization of FAFEN. Errors and omissions excepted.