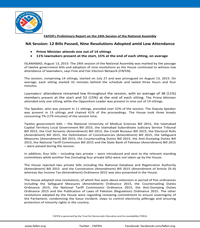 ISLAMABAD, August 13, 2015: The 24th session of the National Assembly was marked by the passage of twelve government bills and adoption of nine resolutions as the House continued to witness low attendance of lawmakers, says Free and Fair Election Network (FAFEN). The session, comprising 14 sittings, started on July 27 and was prorogued on August 13, 2015. On average, each sitting started 32 minutes behind the schedule and lasted three hours and four minutes.

END_OF_DOCUMENT_TOKEN_TO_BE_REPLACED

ISLAMABAD, August 12, 2015: With 18 (5%) lawmakers present at the outset and 29 (8%) at the time of adjournment, the National Assembly took up 90 percent agenda during 13th sitting of its ongoing 24th session on Wednesday, says Free and Fair Election Network in its daily factsheet. The low attendance sitting passed six bills…

END_OF_DOCUMENT_TOKEN_TO_BE_REPLACED

END_OF_DOCUMENT_TOKEN_TO_BE_REPLACED
Press Releases Categories
All rights reserved. Any part of the webpage may be produced or translated by duly acknowledging the source, all content is copyrighted © 2006-2020 Free & Fair Election Network