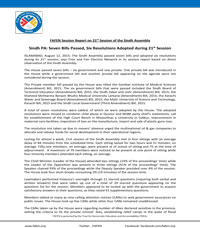 ISLAMABAD, August 12, 2015: The Sindh Assembly passed seven bills and adopted six resolutions during its 21st session, says Free and Fair Election Network in its session report based on direct observation of the Sindh Assembly. The House passed seven bills – six government and one private. One private bill was introduced in the House while a government bill and another private bill appearing on the agenda were not considered during the session.

END_OF_DOCUMENT_TOKEN_TO_BE_REPLACED

ISLAMABAD, August 12, 2015: The Sindh Assembly session was prorogued sine die as five bills were passed amid low attendance of lawmakers on Wednesday, says Free and Fair Election Network in its daily factsheet. The five bills passed by the House included the Sindh Local Government (Third Amendment) Bill 2015; the Sindh Zakat and Ushr…

END_OF_DOCUMENT_TOKEN_TO_BE_REPLACED

ISLAMABAD, August 7, 2015: The first sitting of the Sindh Assembly’s 21st session on Friday was marked by unanimous adoption of a resolution against the controversial statements by MQM Chief regarding the national defense and security institutions, says Free and Fair Election Network (FAFEN). A joint resolution was tabled by members of PTI, PML-N and…

END_OF_DOCUMENT_TOKEN_TO_BE_REPLACED
Press Releases Categories
All rights reserved. Any part of the webpage may be produced or translated by duly acknowledging the source, all content is copyrighted © 2006-2021 Free & Fair Election Network