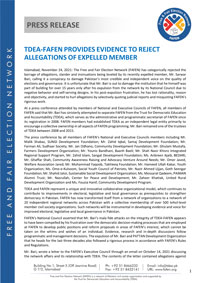 Islamabad, November 24, 2021: The Free and Fair Election Network (FAFEN) has categorically rejected the barrage of allegations, slander and insinuations being levelled by its recently expelled member, Mr. Sarwar Bari, calling it a conspiracy to damage Pakistan’s most credible and independent voice on the quality of elections and governance. It is unfortunate that Mr. Bari is out to damage the institution that he himself was part of building for over 15 years only after his expulsion from the network by its National Council due to negative behavior and self-serving designs. In his post-expulsion frustration, he has lost rationality, reason and objectivity, and started to hurl allegations by selectively quoting judicial reports and misquoting FAFEN’s rigorous work.

At a press conference attended by members of National and Executive Councils of FAFEN, all members of FAFEN said that Mr. Bari has sinisterly attempted to separate FAFEN from the Trust for Democratic Education and Accountability (TDEA), which serves as the administrative and programmatic secretariat of FAFEN since its registration in 2008. FAFEN members had established TDEA as an independent legal entity primarily to encourage a collective ownership in all aspects of FAFEN programming. Mr. Bari remained one of the trustees of TDEA between 2008 and 2015.

TDEA and FAFEN represent a unique and innovative collaborative organizational model, which continues to contribute to improvements in electoral, legislative and local governance as prerequisites to strengthen democracy in Pakistan. FAFEN has now transformed itself from a network of organizations to a network of 20 independent regional networks across Pakistan with a collective membership of over 500 tehsil-level member civil society organizations. Such networks will be instrumental in developing evidence and voice for improved electoral, legislative and local governance in Pakistan.

FAFEN’s National Council asserted that Mr. Bari’s mala fide attacks on the integrity of TDEA-FAFEN appears to have been compelled by his frustration over the democratic decision-making processes that are employed at FAFEN to develop public positions and reform proposals in areas of FAFEN’s interest, which cannot be taken on the whims and wishes of an individual. Evidence, research and in-depth discussions follow programmatic and management decisions. The expulsion of Mr. Bari and PATTAN Development Organization that he heads for the last three decades also followed a rigorous process in accordance with FAFEN’s Rules and Regulations.

The Executive Council discussed Mr. Bari’s response in its virtual meeting held on October 23, 2021. The EC took the cognizance of the response and ongoing malicious campaign by PATTAN Development Organization through its National Coordinator Mr. Bari under FAFEN’s Rules and Regulations, and suspended PATTAN’s membership of FAFEN along with an issuance of a show-cause notice to explain why PATTAN’s membership of FAFEN should not be terminated for causing damage to the reputation as well as integrity of FAFEN and its key officials by hurling unsubstantiated, false, frivolous and baseless allegations against FAFEN member organizations and Secretariat officials, and by refusing to provide any evidence supporting its malicious campaign.

However, Mr. Bari neither responded to the show-cause notice nor did he seek a personal hearing before FAFEN’s Executive Council. In accordance with FAFEN’s Rules and Regulations, the Executive Council referred the case to the National Council with a recommendation of termination of PATTAN Development Organization for causing damage to the reputation of FAFEN and making false claims against ethical and intellectual integrity of FAFEN member organizations and its Secretariat. The National Council in a meeting on November 16, 2021 with all its members in attendance unanimously adopted the recommendation of the Executive Council, and terminated the membership of PATTAN Development Organization. The termination letter reached Mr. Bari via email on November 18, 2021. Two days after his termination, Mr. Bari concocted a set of new allegations of corruption and election observation data fudging for gaining media traction, and held a press conference making his ongoing anti-FAFEN campaign public. Interestingly, in his letter on October 14, 2021 to the FAFEN’s Executive Council, Mr. Bari said, “I acknowledge TDEA’s competence and financial honesty.”

TDEA-FAFEN’s Response: Mr. Bari has levelled the allegation on the basis of untrustworthy sources, selective reading and deliberate oversights by intentionally ignoring the methodology of the said report that clearly states all sources of information used in its preparation. Like all of the rest of his allegations, this is especially ludicrous when he, himself, presented the said FAFEN Report in his capacity as the Trustee of TDEA and representative of FAFEN in Islamabad on February 21, 2014.

Mr. Bari has intentionally concocted the abovementioned allegation of doctoring the results of the FAFEN Report, so as to allow himself to level a false allegation against TDEA-FAFEN representative of misleading the Inquiry Commission of the Supreme Court on General Election 2013. However, Mr. Bari again deliberately failed to read Paragraph 221 of the Inquiry Commission’s Report, which clearly stated that TDEA-FAFEN representative had honestly testified under oath before the Commission that Returning Officers of 161 of 267 NA constituencies had provided the copies of Forms XIV, XV, XVI and XVII to FAFEN observers after the 2013 general elections. This sufficiently belies his claim of fabrication of data.

Moreover, paragraph 227 of the Final Report of the General Elections-2013 Inquiry Commission 2015 accurately documented the testimony of TDEA-FAFEN representative, which again belied Mr. Bari’s claim of PVT finding corroborating with the ECP results. Paragraph 227 reads, “On the basis of PVT system the result tallied with that of 218 constituencies announced by ECP result for winner and 1st and 2nd runner up whilst 18 of these tallied with the ECP result for the winner and 1st runner-up. However, in 1[sic] 18 Constituencies because it was very close margin of victory the winner, and loser may change”. This deliberate oversight by Mr. Bari in reading the Supreme Court Inquiry Commission’s judgement again establishes his intent to malign TDEA-FAFEN’s work.

In addition, Mr. Bari, in fact, endorsed the above-mentioned submission to the Supreme Court and wished FAFEN best of luck through an email dated: April 14, 2015 in his capacity as TDEA Trustee.

Allegation No.2: Misuse of Funds.

Moreover, TDEA’s tax returns are available on its website: https://tdea.pk/income-tax-returns/.

In addition, TDEA is also a registered Non-Profit Organization (NPO) under Section-2 (36)(c) of the Income Tax Ordinance, 2001 granted by the Income Tax Commissioner, Federal Board of Revenue (FBR). The NPO certification follows a rigorous audit process by the FBR. The certificate is also available on TDEA’s website: https://tdea.pk/tax-exemption-certificate/.

All the funding contracts are duly submitted to the Economic Affairs Division (EAD) as per the government’s policy.

Allegation No.3: Unauthorized engagements with Election Commission of Pakistan (ECP).

TDEA-FAFEN’s Response: This is factually incorrect as TDEA cannot incur any expenses without the authorization of its board of trustees. TDEA board of trustees approve the organizational annual budget which also includes project budgets. The authority to approve the day-to-day activities and functions is vested in the Chief Executive Officer (CEO), and is exercised under management policies and procedures. See https://tdea.pk/policies-procedures/

Mr. Bari’s insinuations that TDEA has been “secretly” paying “huge amounts” to cover travel and accommodation expenses of ECP officials are mischievous that appear to be motivated by the mala fide intent of bringing into question the integrity of a constitutional institution. The timing of such insinuations is a cause of concern for FAFEN. The fact of matter is any engagement of TDEA with ECP has duly been approved by the Board as well as the Election Commission belying Mr. Bari’s claim of secrecy and illegitimacy. Such engagements have been arranged to complement the ECP-NADRA and civil society joint campaign to enhance Women’s NIC and Voter Registration, which is being implemented by member organizations of FAFEN since 2017. Mr. Bari’s PATTAN Development Organization has always been implementing such projects. All of engagements were attended by representatives of FAFEN’s member organizations including representatives of PATTAN Development Organization.

TDEA-FAFEN’s Response: FAFEN’s National Council in its meeting on December 24, 2020 had unanimously extended the tenure of the current executive council until the completion of ongoing expansion of FAFEN from a network of organizations to a network of networks. As part of this expansion plan, a total of 20 regional networks including the one formed by PATTAN Development Organization in 11 districts of Punjab have already been established with their regional conveners elected in October 2021. In the second leg of the expansion, FAFEN’s provincial councils have been constituted, and have elected their respective members for FAFEN’s executive council and provincial conveners. The process for expansion followed FAFEN’s Manual of Rules and Regulations, which was duly approved by the National Council on September 10, 2021 during an online meeting. Mr. Bari also attended the meeting, and endorsed the manual of Rules and Regulations. FAFEN Rules and Regulations do not discriminate between founding and other members.