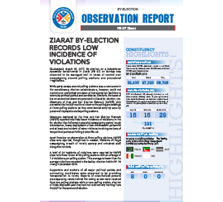 ISLAMABAD, March 26, 2017: By-election on a Balochistan Assembly constituency in Ziarat (PB-07) on Sunday was observed to be managed well in terms of control over campaigning around polling stations and procedural irregularities.

While party camps around polling stations was a rare scene in the constituency, election administrators, however, could not control over unchecked provision of transportation facilities to voters by political parties and candidates. Similarly, the issue of bar on accredited observers persisted in Ziarat by-election, too. Observers of Free and Fair Election Network (FAFEN), duly accredited by the ECP could not observe the polling proceedings at three polling stations as they were denied entry by security personnel deployed outside polling stations.

Observers deployed by the Free and Fair Election Network (FAFEN) reported relatively lower incidence of violations in the by-election that followed a peaceful campaigning period, tough contestation, heavy deployment of law enforcement personnel and at least one incident of minor violence involving workers of two political parties at Polling Station No. 48.

A total of 24 incidents of violations were reported by FAFEN observers from 19 out of 59 polling stations with an average of 1.3 violations per polling station. This average is lower than the average violations recorded in the last by-election held in PP-78 Jhang in December 2016.

Supporters and workers of all major political parties and contesting candidates were observed to be providing transportation to voters. Reports of unauthorized persons accompanying voters behind the voting screen were received from two polling stations while at one polling station, election officials deployed said they had not received any training from the ECP for the conduct of election.

The by-election was necessitated after the death of the Jamiat Ulema-e-Islam Fazl’s (JUI-F) Gul Muhammad Domar. Five parties and three independent candidates ran for the by-election in the constituency known for traditional run between JUIF and Pashtoonkhwa Milli Awami Party (PkMAP).