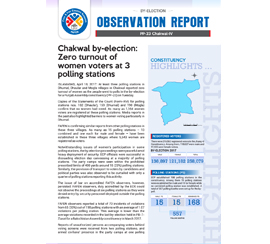 ISLAMABAD, April 18, 2017: At least three polling stations in Dhurnal, Dhaular and Mogla villages in Chakwal reported zero turnout of women as the people went to polls in the by-election for a Punjab Assembly constituency (PP-23) on Tuesday, observes Free and Fair Election Network (FAFEN).

Copies of the Statements of the Count (Form-XIV) for polling stations 182 (Dhaular), 159 (Dhurnal) and 190 (Mogla) confirm that no women had voted. As many as 1,164 women voters are registered at these polling stations. Media reports in the past also highlighted barriers to women voting particularly in Dhurnal.

Notwithstanding issues of women’s participation in some polling stations, the by-election proceedings were peaceful amid heavy deployment of security. ECP officials were successful in dissuading election day canvassing at a majority of polling stations. The party camps were seen within the prohibited prescribed limits of 400 yards around 15 (23%) polling stations. Similarly, the provision of transport to voters by candidates and political parties was also observed to be curtailed with only a quarter of polling stations reporting this activity.

FAFEN observers reported a total of 70 incidents of violations from 65 (33%) out of 198 polling stations with an average of 1.07 violations per polling station. This average is lower than the average violations recorded in the last by-election held in PB-7-Ziarat for a Balochistan Assembly constituency in March 2017.

Reports of unauthorized persons accompanying voters behind voting screens were received from two polling stations, and armed civilians’ presence in the party camps at one polling station. Voters were seen carrying vote vouchers with election symbols of contesting candidates at 16 polling stations.