Every Fourth Eligible Woman Voter in Balochistan Not on Voters’ Lists

QUETTA, December 22, 2016: The political parties, civil society and the officials of Election Commission of Pakistan (ECP) and National Database and Registration Authority (NADRA) vowed to work together to expedite the voter registration of at least five lac missing yet eligible women voters in Balochistan who have yet to be issued Computerized National Identity Cards (CNICs) that is a prerequisite for voter registration.

This resolve came in a consultation arranged by Free and Fair Election Network (FAFEN) in collaboration with its partner organization Center for Peace and Development (CPD). The Members of Provincial Assembly, Provincial Election Commissioner and the representatives of NADRA, major political parties, civil society organizations and media participated in the consultation. 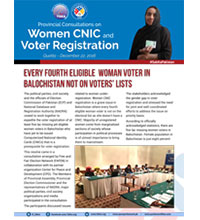 The participants discussed issues related to women under-registration. Women CNIC registration is a grave issue in Balochistan where every fourth eligible woman voter is not on the electoral list as she doesn’t have a CNIC. Majority of unregistered women come from marginalized sections of society whose participation in political processes is of utmost importance to bring them to mainstream.

The stakeholders acknowledged the gender gap in voter registration and stressed the need for joint and well-coordinated efforts to address the issue on priority basis.

According to officially acknowledged statistics, there are five lac missing women voters in Balochistan. Female population in Balochistan is just eight percent less than male population whereas the number of women voters is 15.4% less than male voters. FAFEN emphasized the need to expedite the women CNIC registration to improve the gap between male and female voters in the electoral rolls.

Member of Provincial Assembly Nasrullah Khan Zayray from Pakhtunkhwa Milli Awami Party (PkMAP) appreciated FAFEN’s efforts to facilitate women in getting CNIC and registering as voters. He called upon major political parties to raise awareness among people about voter registration. Mr. Nasrullah also highlighted the challenges in registration of CNIC due to inadequate facilitation by the government departments.

Provincial Election Commissioner Syed Sultan Bayazid assured the civil society of his full support in all activities related to voter registration and education. He underscored the need to bring more than half a million missing women voters on electoral rolls. The civil society, political parties, government and ECP should work hand in hand well before the general elections so that maximum eligible citizens may become voters, he urged.

NADRA Representative Mr. Haroon talked about challenges posed to CNIC registration due to rough terrain of Balochistan and limited resources. However, he said NADRA was supportive to civil society efforts by providing Mobile Registration Vans (MRVs) wherever required.

The representatives of FAFEN partner organizations working in five districts across Balochistan also shared their experiences in dealing with important issues of women CNIC and voter registration. They identified geographical vastness as prime reason for under registration of women and other marginalized groups of the society.

The representatives of political parties and civil society organizations also exchanged their views on the occasion.