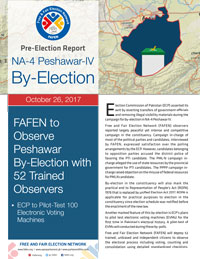 ISLAMABAD October 25, 2017: Election Commission of Pakistan (ECP) asserted its writ by reverting transfers of government officials and removing illegal visibility materials during the campaign for by-election in NA-4 Peshawar IV.

Free and Fair Election Network (FAFEN) observers reported largely peaceful yet intense and competitive campaign in the constituency. Campaign in-charge of most of the political parties and candidates, interviewed by FAFEN, expressed satisfaction over the polling arrangements by the ECP. However, candidates belonging to opposition parties accused the district police of favoring the PTI candidate. The PML-N campaign in-charge alleged the use of state resources by the provincial government for PTI candidates. The PPPP campaign in-charge raised objection on the misuse of federal resources for PMLN candidate.

Another marked feature of this by-election is ECP’s plans to pilot test electronic voting machines (EVMs) for the first time in Pakistan’s electoral history. A pilot-test of EVMs will conducted during these by-polls.

The by-election is being conducted on the seat fallen vacant after the demise of Pakistan Tehreek-e-Insaf’s (PTI) Member of National Assembly (MNA) Gulzar Khan, who won the seat in GE 2013 by securing 38.8 percent of the polled votes. PML-N’s candidate Nasir Khan Musazai was the runners-up who secured 14.4 percent of the votes polled, while he is also contesting the by-election this time.

NA-4 Peshawar-IV is predominantly a rural constituency and covers the Town 4 of Peshawar district, comprising areas of Chamkani, Badabir, Sharikera, and Matni etc. There are a total of 397,904 registered voters, including 235,164 (59%) male and 162,740 (41%) female voters. An increase of 12.9% registered voters has been recorded in the constituency after GE 2013.  However, there still remains a considerable disparity among the registration of male and female voters. A consistent growth in the voter turnout has been recorded during the preceding three general elections. The turnout remained 29.61% during GE 2002, 31.66% during GE 2008 and 40.37% during GE 2013.

Three political parties – MMA, ANP and PTI – had won the elections since 2002 signaling a shift of voters’ preferences. Both ANP and the religious parties, JI and JUI-F, have received considerable vote share in three previous general elections. The PTI has witnessed a sharp increase in its vote bank from 7% in GE 2002 to 37% in GE 2013. The party did not contest the GE 2008.

Historically, all the previous elections in the constituency remained largely peaceful, except for the occurrence of minor altercations between party workers during campaign activities and processions.

Around 53% Turnout, Low Incidence of Electoral Irregularities Mark PP-84 By-Election
ISLAMABAD, May 7, 2021: Despite hot weather and COVID-19 associated challenges, the PP-84 Khushab-III by-election on Wednesday, May 5 witnessed improved election management and an…