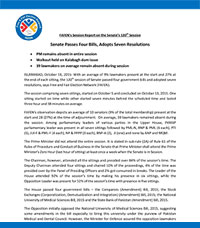 ISLAMABAD, October 14, 2015: With an average of 9% lawmakers present at the start and 27% at the end of each sitting, the 120th session of Senate passed four government bills and adopted seven resolutions, says Free and Fair Election Network (FAFEN).

The session comprising seven sittings, started on October 5 and concluded on October 13, 2015. One sitting started on time while other started seven minutes behind the scheduled time and lasted three hour and 38 minutes on average.

FAFEN’s observation depicts an average of 10 senators (9% of the total membership) present at the start and 28 (27%) at the time of adjournment. On average, 39 lawmakers remained absent during the session. Among parliamentary leaders of various parties in the Upper House, PkMAP parliamentary leader was present in all seven sittings followed by PML-N, BNP & PML (6 each), PTI (5), JUI-F & PML-F (4 each), NP & PPPP (3 each), BNP-A (2), JI (one) and none by ANP and MQM.

The Opposition initially opposed the National University of Medical Sciences Bill, 2015, suggesting some amendments in the bill especially to bring this university under the purview of Pakistan Medical and Dental Council. However, the Minister for Defence assured the opposition lawmakers that the bill would be passed with amendments through support of treasury lawmakers if it was later moved as a private bill. On the assurance of the minister, the House unanimously passed this bill.

The House took up seven Calling Attention Notices (CANs) appearing on the agenda. Two CANs were related to Ministry of Finance followed by one each to Ministries of Foreign Affairs; Petroleum and Natural Resources; Housing and Works; Information & Broadcasting and Water and Power.

The House adopted seven resolutions. During the first sitting, it adopted two separate resolutions to express grief and sorrow over sad demise of former senators Justice (retd.) Javed Iqbal and Gulzar Ahmed Khan. Two supplementary resolutions supporting Prime Minister’s call for resolving Kashmir issue in UNGA and inclusion of Palestine’s flag outside the United Nations Headquarters in New York were also adopted. Another resolution calling for shifting WAPDA House from Lahore to Islamabad was also adopted by the House despite opposition from treasury lawmakers

The House adopted two resolutions in 6th sitting about increasing pension of the retired employees and special development package for an area `Amb’ in Districts Mansehra and Haripur.

Two resolutions to establish constitutional court following Charter of Democracy having equal number of judges from all provinces and shifting Pakistan Cricket Board (PCB) office from Lahore to Islamabad were debated by the House. Another resolution on the agenda regarding concession in custom duties and taxes for the importers of Balochistan was deferred after being opposed by the treasury lawmakers.

Five resolutions on the agenda were not taken up due to the absence of movers which were about steps to make technical education compulsory in educational institutions of Islamabad, enhancing allocation for health sector, measures for welfare of special persons in Islamabad, restoring special allowance with Rest and Recreation leave for the Government employees and poverty alleviation.

A PPPP lawmaker’s privilege motion regarding various answers submitted in response to a similar question on mobile phone service in an area of KPK was referred to the relevant committee.

A motion for an amendment proposed in rule 58 of the Rules of Procedure and conduct of Business in Senate 2012 was forwarded to the relevant committee for further consideration. A motion Under Rule 60 about a matter surfaced during answer to starred question describing criteria, qualification and procedure laid down for appointment of Chairman and Members of Royat-e-Hilal Committee was discussed.

A periodical report on non-broadcasting of programs in Balochi language by the Government controlled Media was presented. The House passed a motion under Rule 204 to constitute a Special Committee on Ethics for finalizing the Rules of Procedure for a permanent Committee on Ethics and draft Code of Ethics for the Members.

A motion under Rule 196 (1) about CPEC was withdrawn by the mover due to similarity of its subject with an AM admitted for discussion. Chairman Standing Committee on Law, Justice and Human Rights moved a motion under Rule 196(1) to consider report regarding corruption in federal government departments which was presented in the House on September 18, 2015. The House adopted this motion and decided to constitute an oversight committee after consultation between the Leader of the House and the Opposition Leader in order to address this issue.

State Minister for Religious Affairs and Inter-faith Harmony presented report regarding Mina incident and nine lawmakers – three from PTI, two each from PPPP & PML-N, and one each from JUI-F and PkMAP – took part in the debate for 29 minutes. State Minister spoke on it for 23 minutes and Chairman Senate for three minutes.

The House took up 23 out of 104 (22%) starred questions on floor of the house, while the Senators raised another 86 supplementary questions. Of these questions, 17 were addressed to Ministry of Interior & Narcotics Control followed by Water & Power (12), Finance (8), Aviation Division, Cabinet Secretariat, Railways (7 each), Housing & Works, Foreign Affairs (6 each) etc.

The House debated seven out of 12 motions under Rule 218 which dealt with implementation of Aghaz-e-Haqooq-e-Balochistan Package, increase in gas tariff, double-lane of Indus Highway, political situation, Hajj policy, performance of National Counter Terrorism Authority (NACTA) and situation of exports in the country. On the other hand, four motions under Rule 218 were dropped due to absence of movers (under sub-Rule (3) of Rule 218, read with sub-Rule (2) of Rule 136) which were about performance of Ministry of Industries and Production, ignoring Council of Common Interest while deciding policy matters related to oil and gas, alleged violations during recent appointment process in Statistics Division and devaluation of Pakistani Rupee. One motion under Rule 218 moved in the House was about increase in population of the country.

The House witnessed presentation of six reports. Two legislative reports were about the National University of Medical Sciences Bill 2015 and the State Bank of Pakistan (Amendment) Bill, 2015. Four reports tabled in the House were about CAN cordoning off a playground-cum-funeral place by the security forces in a village in Abbottabad; an AM regarding proposed conversion of 1400 acre land of National Agricultural Research Centre by CDA; lapse of various foreign scholarships offered by different countries for Pakistani students and 1st Biannual Monitoring on the Implementation of National Finance Commission (NFC) Award (July-December, 2014).

Twelve Adjournment Motions (AMs) appeared on the agenda during the session of which six were debated, one was withdrawn, three were disposed of and two were not discussed. The Chairman gave a detailed ruling about the resignation of MQM Senators.

The lawmakers raised 27 points of public importance that consumed 69 minutes of the session. The House witnessed four instances of walkout during the session. Lawmakers from ANP, PPPP and PkMAP walked out of the House for 21 minutes in the first sitting against statement of PML-N lawmaker about Kalabagh dam.

A PPPP female lawmaker pointed out the quorum in 4th sitting which led to the suspension of the sitting for 40 minutes. However, the quorum was found to be incomplete after resumption of the proceedings and the sitting had to be adjourned.

This publication is based on direct observation of the Senate proceedings conducted by PATTAN Development Organization – a member organization of FAFEN. Errors and omissions are excepted.

END_OF_DOCUMENT_TOKEN_TO_BE_REPLACED

Senate addresses 83 percent agenda, discusses political issues
ISLAMABAD, July 14, 2021: The Senate took up 83 percent of its agenda on Wednesday and consumed 42 percent of the proceedings in points of…