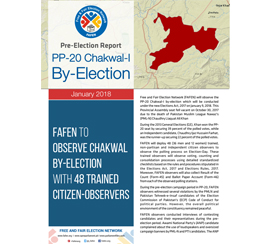 ISLAMABAD January 8, 2017: Free and Fair Election Network (FAFEN) will observe the PP-20 Chakwal-I by-election which will be conducted under the new Elections Act, 2017 on January 9, 2018. This Provincial Assembly seat fell vacant on October 30, 2017 due to the death of Pakistan Muslim League Nawaz’s (PML-N) Chaudhry Liaquat Ali Khan

FAFEN will deploy 48 (36 men and 12 women) trained, non-partisan and independent citizen observers to observe the polling process on Election-Day. These trained observers will observe voting, counting and consolidation processes using detailed standardized checklists based on the rules and procedures stipulated in the Elections Act, 2017 and Elections Rules, 2017. Moreover, FAFEN observers will also collect Result of the Count (Form-45) and Ballot Paper Account (Form-46) from each of the observed polling stations.

During the pre-election campaign period in PP-20, FAFEN observers witnessed several violations by the PMLN and Pakistan Tehreek-e-Insaf candidates of the Election Commission of Pakistan’s (ECP) Code of Conduct for political parties. However, the overall political environment of the constituency remained peaceful.

FAFEN observers conducted interviews of contesting candidates and their representatives during the pre-election period. Awami National Party’s (ANP) candidate complained about the use of loudspeakers and oversized campaign banners by PML-N and PTI candidates. The ANP candidate also accused the PML-N lawmakers and the local governments of favouring the ruling party’s candidate. Both the PMLN and PTI candidates were observed using loudspeakers despite a ban on their use during the campaign period.

A total of five candidates are contesting the by-polls in PP-20. Sultan Haider Ali Khan is contesting the by-election on the PML-N’s ticket, whereas PTI has awarded its ticket to Tariq Mehmood Afzal. ANP has fielded Imran Qaiser Abbas. Tehreek-e-Labbaik Pakistan (TLP) is fielding Chaudhry Nasir Abbas for the election. An independent candidate Muhammad Tufail is also in the run for the constituency.

This by-election will be the first in the country being held under the new unified election law, the Elections Act, 2017. According to Section 59(6) of the Act, the District Returning Officer (DRO) is required to issue the List of Polling Stations to be set up in the constituency at least thirty days prior to polling day. The DRO in PP-20 issued the List of Polling Stations on December 12, 2017, which is 28 days before the polling day.

The PML-N won the seat in 2008 and 2013 whereas the PML was victorious in 2002. The PML candidate, Chaudhry Ijaz Hussain Farhat, secured runner-up position in GE-2008. Farhat contested the seat in GE-2013 as an independent candidate and remained runner-up, while the PML-N won the constituency with a convincing margin of 26,518 votes.