ISLAMABAD, September 23, 2020: The prices of vegetables, meat, pulses, and wheat remained higher than the officially notified prices in most parts of the country due to weak monitoring, says the Weekly Price Monitor of the Free and Fair Election Network (FAFEN).

The traders sold routine vegetables—onions, potatoes, and tomatoes—higher than official rates in nearly two-third of districts, wheat flour in 48 per cent, meat in 52 per cent, and sugar in 30 per cent areas.

This Weekly Price Monitor comprises a market survey of 15 basic groceries conducted on September 17, 2020 (Thursday) in 23 cities—ten in Punjab, six in Balochistan, five in  Khyber Pakhtunkhwa, and two in Sindh.

The market prices of routine vegetables, i.e., potatoes, onions, and tomatoes, showed varying patterns in a two-week comparison. However, the pulses prices remained mostly stable in more than 73 per cent of the surveyed districts.

Around two-third areas showed a decline or stability in potatoes and onions’ rates during the reporting week compared to the previous one. However, 74 per cent of the observed regions witnessed an increase in the prices of tomatoes.

The meat prices also remained mostly stable except for chicken, which increased in two-third observed areas. Egg prices registered a hike in 53 per cent districts, sugar in 52 per cent, and wheat flour in 29 per cent districts. 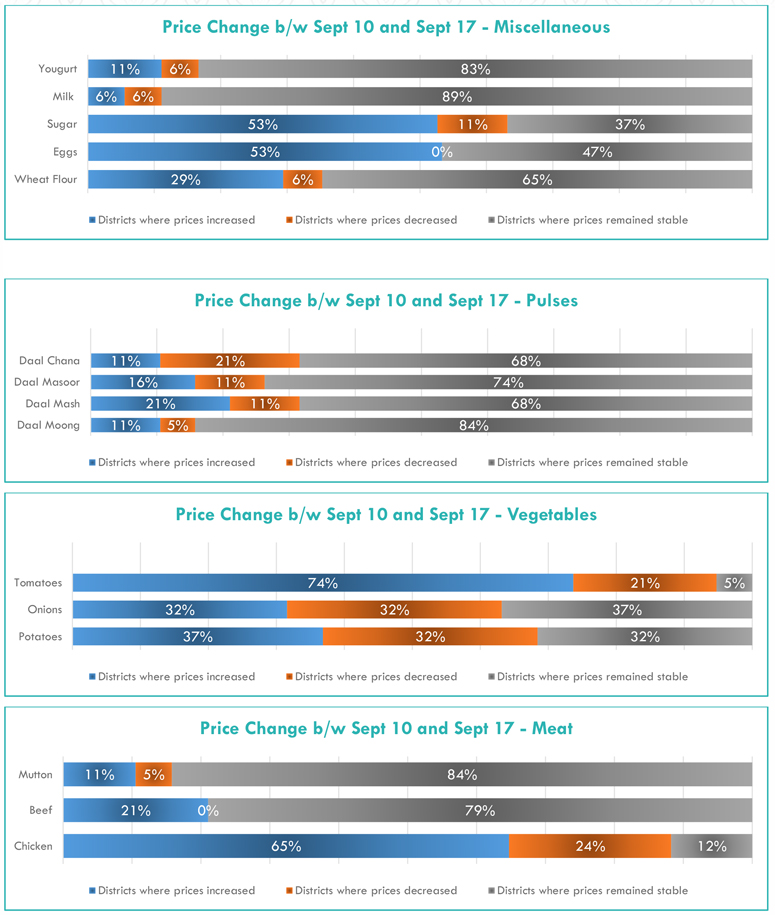 In the meat category, mutton and beef were overpriced in 52 per cent of districts. The markets in Karachi South sold mutton and beef higher than the official price for Rs810 and Rs700. Moreover, markets in nearly 35 per cent of districts did not follow the officially notified rates of chicken. Multan reported the highest difference of Rs29 in the market price and official chicken rate. 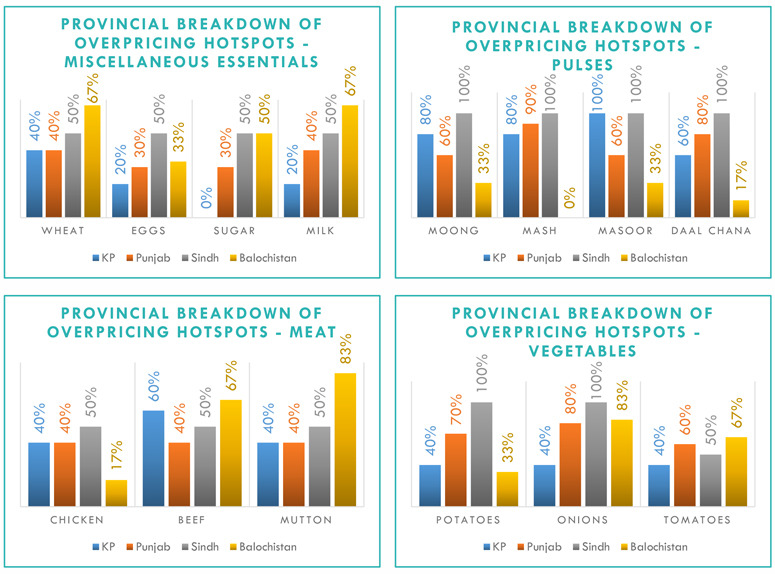 The official and market prices of various pulses also saw a significant difference in many regions. Masoor and mash pulses were sold above the official prices in 65 per cent while chana and moong pulses at higher rates in 61 per cent of the districts. Mash pulse retailed at Rs193, moong Rs180, masoor Rs104, and chana Rs78 above the Karachi South markets’ officially notified rates.

Refined sugar and wheat flour were sold above official rates in 30 per cent and 48 per cent districts. A 20-kilogram wheat flour bag was priced Rs450 above the official rate in Washuk. Similarly, refined sugar was Rs36 higher in Karachi South. The market prices of per dozen eggs were also more than the officially notified rates in 30 per cent districts and the milk and yoghurt rates in 43 per cent and 52 per cent of the observed regions.