ISLAMABAD, October 01, 2020: More than half of the markets throughout the country sold essential items including pulses, vegetables, meat, and wheat flour at inflated prices, neglecting the officially notified rates, says the Weekly Price Monitor of the Free and Fair Election Network (FAFEN).

The observers reported stability in official prices of most essential commodities in comparison with last week. But, the traders sold routine vegetables—onions, potatoes, and tomatoes—higher than official rates in nearly 57 per cent of the observed areas wheat flour and sugar in 50 per cent, and meat in 60 per cent. This Weekly Price Monitor comprises a market survey of 15 basic groceries conducted on September 24, 2020 in 20 cities—eleven in Punjab, five in Balochistan, and two each in Khyber Pakhtunkhwa and Sindh.

In a two-week comparison, the market prices of routine vegetables, i.e. onions and tomatoes, showed varying patterns but the rates of potatoes remained mostly stable. The pulses prices were also steady in more than 56 per cent of the surveyed districts while those of meat did not witness a surge in more than 90 per cent areas.

The meat prices also remained mostly stable or fell in more than 90 per cent of the districts covered. Egg prices registered a hike in 38 per cent and sugar in 41 per cent areas while prices of wheat flour saw no increase in the observed regions. 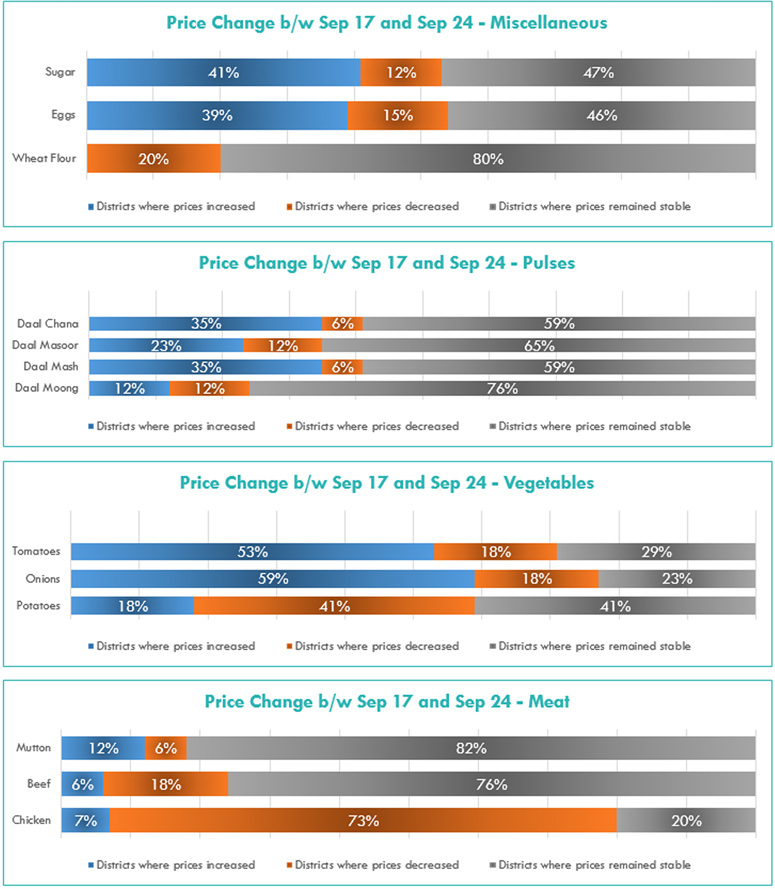 The observers from several districts reported that essential grocery items’ official prices were not notified or readily available. The official rates of sugar and wheat flour were not accessible in 65 per cent and 25 per cent of the districts.

The same went for three pulses—moong, masoor, and chana—missing in nearly 13 per cent of the regions and mash pulse in 17 per cent.

Milk and yogurt prices were not publicly available in 25 per cent and 30 per cent districts. Moreover, meat prices were missing in 13 per cent regions and poultry in 40 per cent. However, the vegetables’ official rates were generally available except for ten per cent of the surveyed markets.

In the meat category, mutton and beef were overpriced in 60 per cent of districts. The markets in Multan sold mutton higher than official prices of Rs500, while the beef was sold in Karachi Central’s markets Rs230 higher than the official rate. Moreover, markets in nearly 15 per cent of districts did not follow the officially notified rates of chicken. Multan reported the highest difference of Rs22 in the market price and official chicken rate. 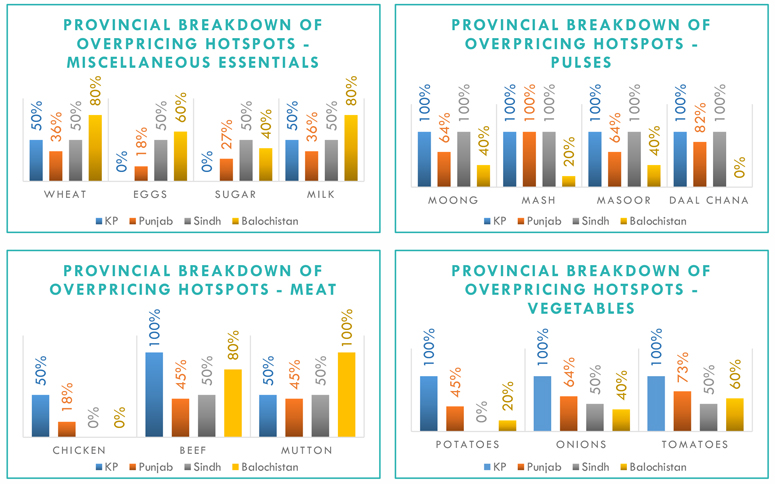 The official and market prices of various pulses also saw a significant difference in many regions. Masoor, chana and moong pulses were sold above the official prices in 65 per cent while mash at higher rates in 80 per cent of the districts. Moong and masoor pulses retailed at Rs120 and Rs65 above the officially notified rates in Peshawar while shopkeepers sold mash and chana pulses Rs103 and Rs33 higher in Karachi Central and Lodhran.