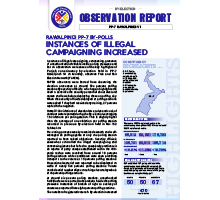 ISLAMABAD, September 26, 2016: Instances of illegal campaigning, canvassing, presence of unauthorized individuals inside polling premises and bar on observation were some of the major irregularities of Punjab constituency by-election held in PP-7 Rawalpindi-VII on Monday, observes Free and Fair Election Network (FAFEN).

FAFEN observers were barred from observing the election processes at around five percent polling stations by security officials, which again highlights the need to sensitize the security personnel about electoral norms and laws before deploying them on polling day. When the security officials deployed at polling stations were asked if they had received any training, 27 percent replied in the negative.

ECP set up 167 polling stations for the by-polls, 21 of which were declared as sensitive.

The by-election was necessitated due to the death of Muhammad Siddique Khan who was victorious in General Election 2013. Mr. Siddique of PTI had secured 48,440 votes followed closely by PML-N’s Ch. Nisar Ali who polled 47,666 votes.

Five candidates contested for the seat in PP-7, three of whom were on party tickets (PTI, PML-N and PPP) while two ran independently.

FAFEN trained and deployed a total of 27 observers – 17 men and 10 women – to observe 167 polling stations, however, this preliminary report is based on the information acquired telephonically from 85 polling stations on the Election Day. The observers were trained to observe the opening, closing and counting processes of the election.